Wearables and dozens of real time applications use a microcontroller other than a microprocessor for their core design of the entire product. And, these days almost every electronic device comes with a microcontroller.

Most of the embedded applications make use of a microcontroller unit (MCU) to perform computing operations and Boolean functions.

This article covers the microcontroller basics along with its working, applications, advantages, and disadvantages.

What is a Microcontroller?

Microcontroller (MCU) as the name suggests it is a tiny device that executes dedicated tasks assigned by the user. Tasks may be related to normal calculations like addition, subtraction, division and floating point math.

They are often referred as “On-Chip microcomputer” in some cases. The building blocks of the microcontroller are the processor, memory, and peripherals.

Here is the inside view of microcontroller architecture. 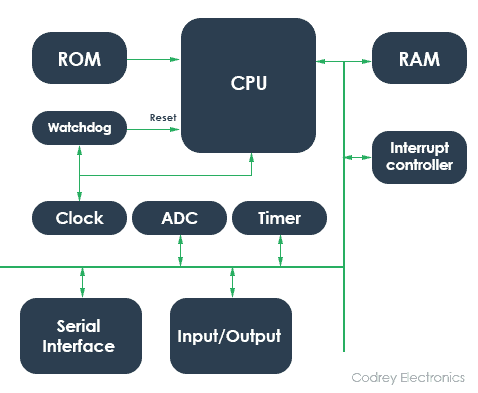 Basically, the CPU is the central part of a microcontroller. It is a brain that follows out an action given by the user. The CPU fetches the instruction from the memory (ROM), decodes it and executes it. This technique is known as pipelining. The pipelining is done with the help of the data bus and address bus.

The CPU operates instructions at a speed of MegaHertz (MHz) or GigaHertz (GHz).

The MCU requires the clock to do any task. To provide a clock to the microcontroller, a crystal oscillator is driven to the CPU.

The crystal selection determines the speed at which microcontroller want to operate. The frequency range of the crystal oscillator is generally in the range of MHz.

Input/output ports are commonly called as GPIO (General purpose Input output) ports. This means these ports can be used either as input or output. Some micro MCU supports alternate GPIO. They can be used for multiple functions.

They are required for connecting the external devices like Display interfaces (LED, LCD, and touch screen), motors, etc. I/O ports are also used for input sensing and switching purposes.

As you know, memory is of two types (RAM and ROM).

RAM (Random access memory) is for storing the temporary storage of data and ROM (Read Only Memory) is for permanent storage.

Timers are the most innovative peripherals that can produce precise time delay. It can repeat a pre-defined task at a known time period.

The Counter is a peripheral that counts the events happening outside the MCU.

Applications of counters include pulse measurement, object detection, etc. They are used in frequency measurement, to count the rise or fall in temperature in microwave ovens, to measure the set time in washing machine and electric heaters.

Sensors convert physical parameters like temperature, humidity, and pressure into analog signals. The ADC converts this analog signal into digital bytes. The analog signals may be in the form of voltage, current or resistance.

It has an internal clock that measures the clock cycles fed by the MCU and samples with its own clock. The number of clock cycles represents the digital representation of analog voltage.

DAC (Digital to analog conversion) is a contrary of ADC. DAC converts the digital data into an analog voltage form. Some of the applications of DAC include digital signal processing, motor control, music players, digital potentiometer etc.

An Interrupt is an event that comes into play to do more than one task. When an interrupt is called the microcontroller stops the current execution (first task) and performs other tasks (second task). After completing the second task, it comes back to the first task and carries out normal operations.

In some scenarios, the term microprocessor or microcontroller is quite confusing. But, both of them have similar features with added features for the microprocessor.

When the power supply is switched on, the crystal oscillator triggers clock pulses and generates the frequency. After some time, the oscillator gets stabilized.

The main advantage of the microcontroller is that the cost and size is less. The interfacing of peripherals becomes easy with I/O ports. And, the speed of execution is faster in terms of speed and memory.

To use a microcontroller in your application other than the processor, here are the key advantages.

The most undesirable thing when working with microcontrollers is, they cannot withstand high voltages. The main disadvantage of the microcontroller is that the architecture is difficult to understand.

Other than above, they have limited amount of RAM and not suitable to perform parallel tasks simultaneously.

There are many applications of microcontroller. But here are a few of them.

Microcontroller has shortened the human efforts by doing repeated jobs.

Ever wish you had worked with a microcontroller to handle complex tasks? Share your thoughts in the comments below.