The resistor color code was developed during the year 1920. The color bands are printed on the body of tiny resistor components. Generally, for color code, we can use this resistor mnemonic called BBROY Great Britain Very Good Wife. Whereas, the beginning letter indicates a unique color.

This color-coding shortcut has an acronym for how to identify a resistor value.

Resistors use the BS1852 (British standard) coding standard for value representation. It uses letter 'R' for ohms, 'K' for Kilo ohms, and 'M' for Megaohms. For example, a 4.7K ohm resistor is shown as 4K7.

The Carbon composition resistors have 3 to 6 resistor color bands. The 3-band resistor has three colors with multiplier and no tolerance.

The three bands can be selected to know the resistor value. Whereas, the 4 band, 5 band, and 6 band resistors have an extra band known as tolerance.

The multiplier value is multiplied with the significant digit number (one, two, or three digits) to get the desired resistance value. In addition to this the 4 band, 5 band, and 6 band resistors have tolerance value ranging from ±0.10 to ±10.

To understand how to read the resistor color code for 3 /4/5/6 band resistors you can use this color chart. 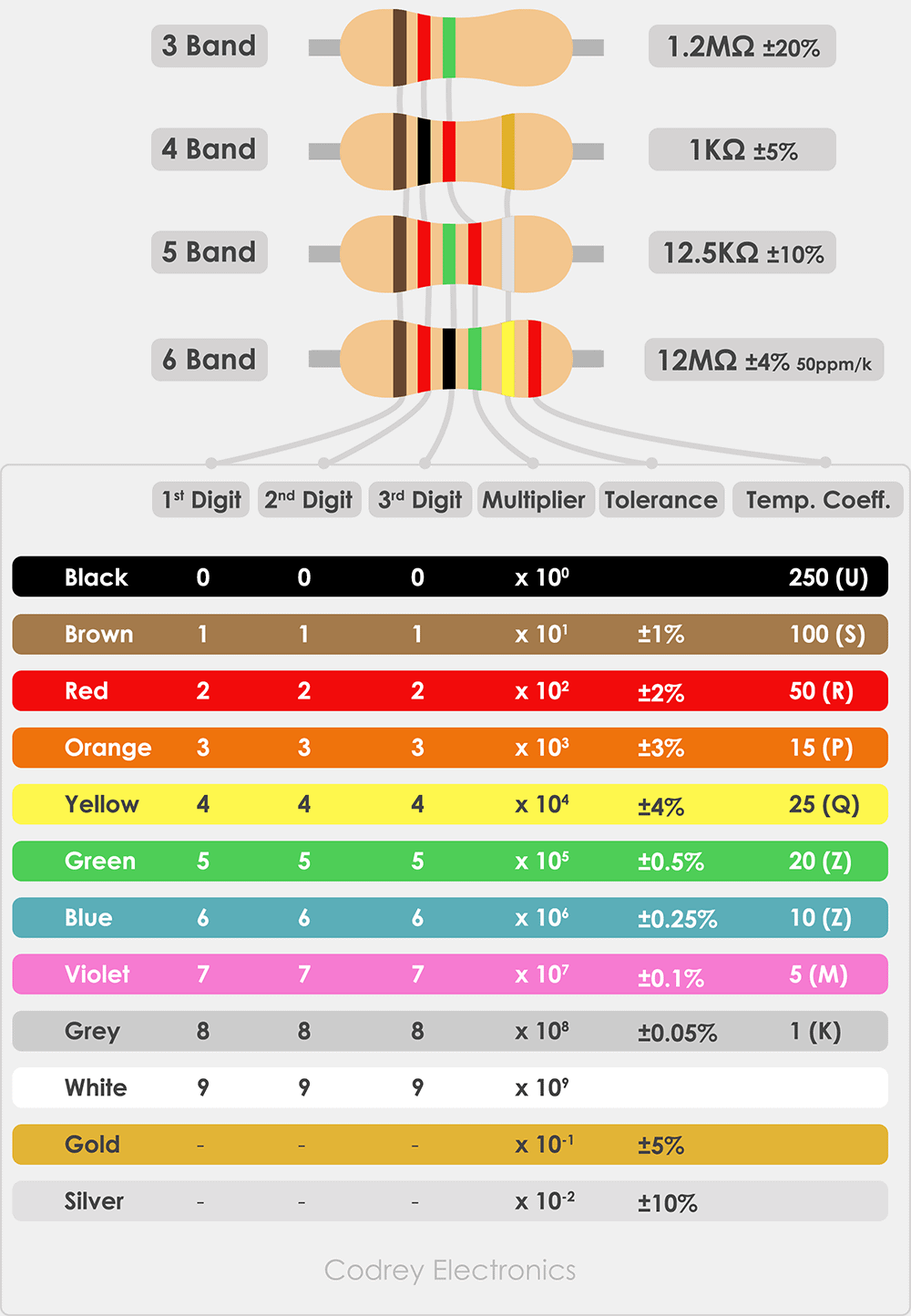 From the above chart, each color band on the resistor represents a number. For example, to calculate 1.2MΩ, the resistor shows Brown Red Green colors (read from left side to right). Now place the first two bands as the numeric value and third band as a multiplier (105).

To meet the military specification resistors often manufactured with reliability band. This band is not found in commercial electronics. Typically, a 4-band resistor comes with a reliability band.

This resistor comes with a single black band used to connect the traces on a Printed Circuit Board (PCB). It is used as an interconnection between two joints.

Resistor bands with Gold and Silver

The gold and silver bands are prone to misconceptions of true colors in a resistor. Hence, they are replaced with grey and yellow color bands.

How to Use the Resistor Color Code Calculator

The resistor calculator tool calculates the color code for 3band, 4 band, 5 band, and 6 band resistors typically in the range of ohms, Kilo Ohms, and Mega Ohms.

The resistance calculator has 1 to 6 band colors with Multiplier (Mul) and tolerance (Tol) and PPM/Kelvin. You must select the right color corresponding to each column. The tolerance value tells the accuracy at which the resistor is manufactured. Normally, for gold, it is 5% and for silver, it is 10%.

This will display the true resistance value with tolerance and temperature coefficient of resistance.

To explore more, let’s discuss a few examples of resistor color code for 4, 5, and 6 band resistors. 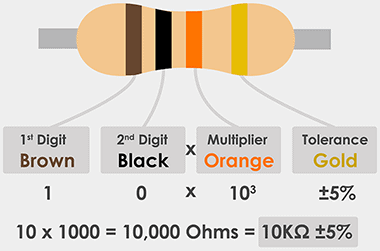 This marking code changes from one decade to another decade. This is known as the EIA color code. For each tolerance band, the EIA allocates E-series (E3, E6, E12, E24 and E96) to name the resistor values.

The standard decade resistors (also known as preferred values) are shown in the below table. The resistance calculation is starting from 1 ohm with tolerance range (36%, 10%, 5% and 1%).

To find the resistor values from E-series, take the preferred resistor with tolerance. We will get resistances by multiplying value with the multiplier constant. For example, E6 series resistor (1 ohm) with tolerance ±20, the set of resistances is 1, 20, 400, 8K, 160K.

Carbon strip resistors do not have their resistance value and tolerance printed on their body due to their size. Hence the resistor color code chart and calculator help to find out the resistor value without using a digital multimeter.

Here are some points to remember on resistor color coding.