Let me start with a ‘reversed’ idea! The circuit used for demonstration here is an uncommon LED flasher based on a reversely connected BJT. When wired in reverse (when collector and emitter are reversed) avalanche magnitude of a BJT is usually lower than its normal avalanche voltage. Note that when BJTs are operating in reverse avalanche region as tried here, they can also be called as negistors (higher the current, lower the resistance). Well, the following circuit diagram shows you one simplest form of a reverse avalanche pulse generator. 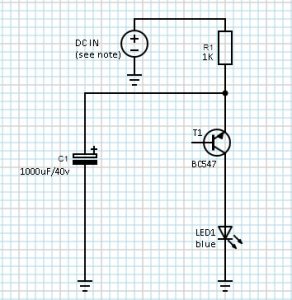 Working principle of the circuit is extremely simple. The 1000uF capacitor (C1) is charged via a 1K current limiting resistor (R1). Initially theBC547B transistor (T1) is in nonconductive state, but when the voltage across the reservoir capacitor reaches a certain level, the transistor enters the avalanche breakdown mode, and exhibits negative resistance. Consequently, the capacitor discharges rapidly through the LED (LED1). The voltage across the transistor drops until the avalanche mode can no longer be sustained, and then the it move back into its normal state and becomes nonconductive again. This cycle continues and as a result the rapid discharging through the LED demonstrates itself as short flashes. Flashing rate of the LED counts heavily upon the RC constant and the transistor’s breakdown characteristics. For a typical 5mm blue LED, no current-limiter resistor is required as the duration of the current flow is extremely short. But if you’re using a different LED you may need to include one current limiting resistor to protect the LED.

I made the test using the same circuit setup shown above, and found that the minimum voltage required for the circuit to operate is just about 12.5V. Since it’s also noticed by me that the same transistor from various manufacturers/sellers can comport quite differently, your results might be rather dissimilar than what I have here. Likewise, as the input supply voltage changes, the pulse interval changes fairly as well.

Below is what my finished test circuit looks like made entirely from junk box parts. 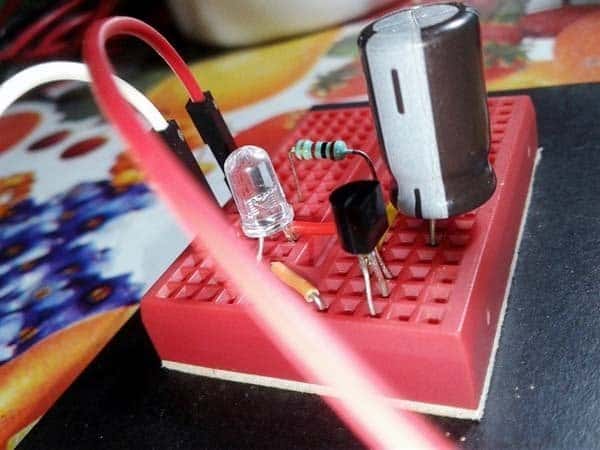 The casual oscilloscope capture below shows the waveform measured at the anode with respect to ground (0V), when the supply voltage is in 12.5V – 14.5V range. You can also watch a quick test movie included elsewhere in this post. 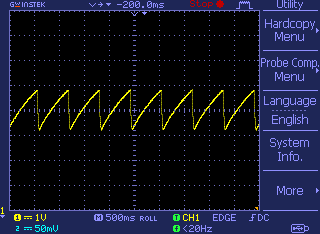 A standard avalanche pulse generator circuit basically relies on the negative differential resistance in a bipolar junction transistor’s avalanche breakdown region to form a relaxation oscillator. Below is the simple (and quite popular) circuit of a typical avalanche pulse generator based on a 2N3904 transistor. Note that you can make a try to substitute the avalanche transistor 2N3904 with another available general-purpose transistors such as 2N2222, 2N4441, MPSA42, MPSA44, BC107, BC337, S9014, S8050, etc., not every general-purpose NPN transistor can faithfully avalanche, though! 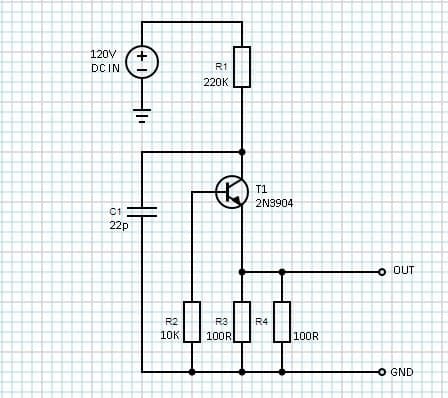 In this circuit, components R1 and C1 determines the operation frequency, and it’s at roughly 30 kHz. To deliver the high voltage demanded by the avalanche pulse generator, you’ll obviously need a dc-dc boost converter. Since the current here is very low, a regulated high voltage dc output is not very crucial. You can find numerous dc-dc boost  converter (high-voltage version) circuits everywhere on the web. Take any one of those tried and tested circuits – it’s simple (http://www.aholme.co.uk/Avalanche/Avalanche.htm).

If everything’s fine, probably you’ll get a pulse output across the load resistors (R3-R4) similar to the one shown below captured with a 100MHz bandwidth oscilloscope . A very fast oscilloscope (not mine, unluckily) is required to do it justice. See it’s a 2.5nS rise time which translates into a bandwidth around 140MHz (an impedance mismatch surely slowed it down, but not bad). 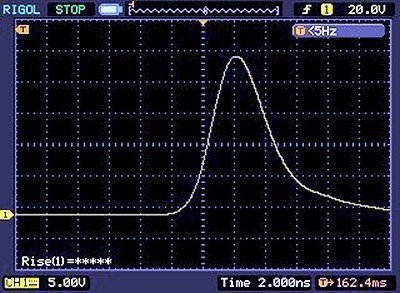 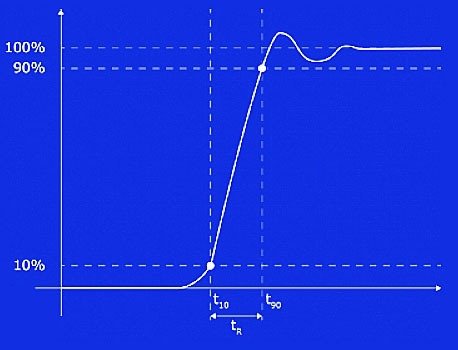 I hope you all know that rise time can be used to measure Gaussian bandwidth using the simple formula: BW = 0.35 / T where BW = bandwidth and T = rise time. This is the commonly used relationship between the rise time of a signal and its bandwidth. If we want a rough measure (a rough approximation) of the highest frequency components in a signal, it’s about 0.35 divided by its 10-90 rise time. The underlying assumption here is that the signal is the response of a 1-pole filter and the bandwidth is the -3 dB point of the filter. Since there’re ofcourse other ways to estimate the connection between the bandwidth and rise time in a signal, I’ll try to explain the rest through another article, subsequently.

I’ve devised a way to employ bipolar transistors operated in avalanche breakdown mode to construct great avalanche pulse generators. Such generators of nanosecond-scale pulses of voltage (or current) can be used to drive electro-optical devices such as laser diodes. An elucidated article on a do-it-your self laser diode pulser project will come after in time. Much fun!

Some very good advice and an example of an avalanche pulse generator from the celebrated analog guru Jim Williams can be retrieved from Linear Technologies AN47 application note.