The capacitor is the basic electronic component that is used for storing, surge suppression and filtering. It is a widely used and important component in the family of electronics. Like resistor, capacitors are passive components to store an electric charge. The amount of charge that it can store depends on the distance between the plates.

There are various kinds of capacitor available in different shapes and sizes depends on its dielectric material and voltage rating. It can be selected according to the application of the circuit. To know in detail, we will start with the structure of a physical capacitor. 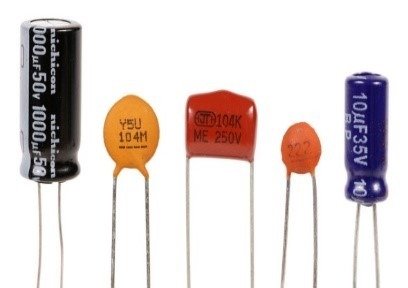 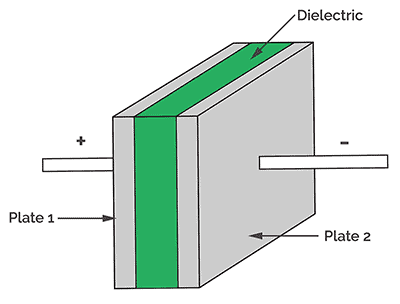 Construction of a parallel plate capacitor

The device consists of two conducting metal plates which are separated by an insulator (a material which do not allow the passage of current) called dielectric. The conducting material is made up of aluminium or other metal and the dielectric can be made up of ceramic, glass, paper or plastic. The metal plates of a capacitor can be either square, circular or rectangular, or they can be of any other shape and size. A two lead is brought out from each plate to enable the device to be connected to a circuit.

When a voltage is applied to the two leads through a battery source, the charge deposits on the plates of the capacitor. As long as this voltage (potential difference) is equal to battery voltage (E) the circuit is in balance condition. When we break the connection of the battery the charges cannot flow away and the voltage remains stable between the two plates. This combination of two plates, which are separated by an insulator and which are able to store some amount of electricity is called a capacitor or condenser.

Dielectric constants for some of the dielectric materials are given as:

How does a Capacitor work? 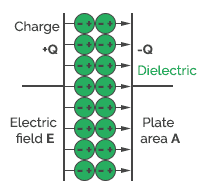 When a voltage source is applied, electrons from the plate connected to the +Ve side of the battery will flow to the negative side of the battery and are pushed towards the other side of the capacitor plate. Electrons can’t be able to pass through the capacitor because of the insulating material i.e. dielectric. So, the electrons will start accumulating on the other side of the plate. Now the top plate will get positively charged and the bottom plate will be negatively charged. At this point, the capacitor is fully charged creating an electric field (E) between them and current is not able to pass through the circuit because of the dielectric material.

In a DC circuit, a capacitor can charge up to its supply voltage i.e. the voltage applied is equal to the voltage across the capacitor. Since DC can flow only in one direction because of the dielectric it blocks the current flow when it is charged.

The charging and discharging cycle of the capacitor can be demonstrated using the following figure.

The electron current will continue flowing until there is no longer potential difference between the two plates. We say then that capacitor is discharged. In position 1 of the switch, the capacitor was charged. 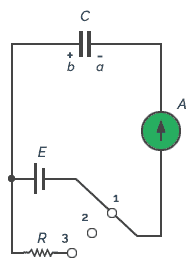 Diagram for charging and discharging of the capacitor

In open circuit, the capacitor works as direct current. Now the capacitor starts discharging
through the load. The potential difference between the plates gradually decreases down to zero. This is the falling state.

Let’s say, for example, if you have a battery (E) connected to a capacitor circuit, the battery will charge the capacitor completely.

Even if you remove the battery, the capacitor can hold some amount of electric charge and power until it gets discharged. In this case, capacitor works like a rechargeable battery.

Every capacitor has a maximum voltage rating. This plays a mighty role in determining the circuit performance. In the initial state (open switch), when there is no power the capacitor is uncharged. When some amount of power is driven through a capacitor (closed switch) the capacitor starts charging. Now, the capacitor is partially charged.

The electricity is represented in terms of electric charge ‘Q’ and is directly proportional to potential difference V. The total amount of charge can be stored in a capacitor is given by the equation, Q = CV i.e. multiplying the capacitance value and the voltage applied to it gives the total charge.

C=capacitance determines how much of a charge difference the capacitor holds when a certain voltage is applied (F),
ε= absolute permittivity of the dielectric (F/m),
A=surface area (m2),
d=distance between the plates (m)

Okay. How do we increase the capacitance?

Here are some of the properties of the practical capacitor.

The capacitance may change with the working temperature and the circuit frequency.

Tolerance is how much more or less you can expect capacitors actual capacitance to be from its rated capacitance which is printed on the capacitor. Tolerance rating is expressed as plus (+) or minus (-) value in ± Pico farads for low-value capacitors which are less than 100pf or as a percentage (± %) higher than 100pf for high-value capacitors. It can range from -20% to +80% i.e.  If a 100µF capacitor with a tolerance of ±20% can vary from 80µF to 120µF.

Capacitance may vary with change in temperature because of the dielectric properties. The normal working temperature of capacitors vary from -30ºC to +125ºC. These changes in the temperature sometimes cause damage to the circuit.

Majority of the electrolytic capacitors are polarized. So, we need to connect the capacitors correctly when it is connected to the power supply.

If the polarity of the capacitor is incorrectly connected, the oxide layer inside the capacitor may break which can cause high current to flow through the device results in damage to the circuit.

The unit of capacitance is measured in terms of a farad, mostly in microfarads. Capacitance determines how much amount of charge it can store. Higher the capacitance, more capacity to store charge. A one-farad capacitor stores one coulomb (unit of charge Q) which is equal to 6.28 × 1018 of charge when a potential of 1 volt is applied across the capacitor.

If the capacitance value ranges from farad to kilo farad, these capacitors are called as super or ultra-capacitors.

Capacitors symbol can be identified as polarized, non-polarized and variable. The schematic of the symbol is represented by the following symbols:

We know that a capacitor is used to store energy. Different types of capacitors have different applications. Some of the applications include

Other than above, Capacitors offer power factor correction, back up of data in Real-time Clocks (RTC), and Battery powered applications using supercapacitor. Typically capacitor has a capacitance of 1 Farad when a charge of 1 Coulomb produces one volt across it. For practical purposes, this farad is subdivided into smaller units such as microfarads, Pico farads and Nanofarads. Another interesting property of the capacitor is electrostatic shielding, which means when a third plate connected to earth is inserted between the two plates, the capacitance between the two plates will be reduced to zero.