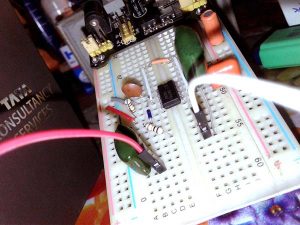 Aware that a particular circuit is needed to measure electrical conductivity (EC) of  a liquid. Since the conduction of current through a water solution is mainly dependent on the concentration of dissolved ionic substances such as salt, conductivity ranks as one of the key inorganic water quality parameters. There’re so many different approaches to measure EC, but the most common method is the use of  a pair of submerged probes as the part of a resistor divider, and measuring the resistance between them (Resistance =1/Conductance). I’m sure there’re many other great ideas that I’ve yet to find out, however, now I’d like to introduce one quick and easy circuit of a do-it-yourself electrical conductivity (EC) sensor based on the evergreen 555 tiny timer chip!

As you may well know, direct current (DC) must not be allowed to flow through the submerged metal probes of the EC sensor, or else the probes (electrodes) will corrode. The resistance of the oxide layer that quickly formed on the metal surface is nonlinear, and eventually making the reading imperfect. The alternating current (AC) probe excitation can be tacked on to avoid this problem by reversing the polarity of the current flow  many times per second, so that electrode polarization takes place at either probe.

Role of 555 timer chip in the electrical conductivity sensor

A dc operated circuit naturally calls for a suitable oscillator to provide ac excitation. You can of course build a 555 IC based oscillator (astable multivibrator) circuit to blink an indicator at a tempo that’s inversely proportional to the conductivity of the solution under examination.  When 555 IC is wired as shown in next figure, it will trigger itself and free run as a multivibrator. The external capacitor C charges through RA + RB and discharges through RB. Thus the duty cycle may be precisely set by the ratio of these two resistors. It’s an extremely simple task because you just need to replace the resistor RB in the basic 555 IC astable multivibrator circuit with a pair of sensor probes/electrodes to start the play. On the other hand, you can attach the electrodes in parallel with the existing resistor RB. Did you get it? Here’s the web link of a similar idea/project https://publiclab.org/wiki/555-conductivity-meter 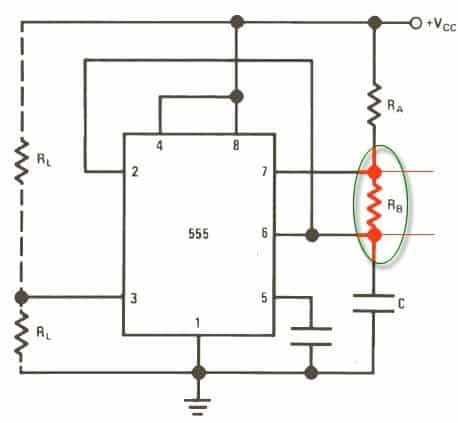 Granted that it’s a good theme, all the same I still want to go with another idea. Following is the basic circuit diagram of my Easy 555 EC Sensor! 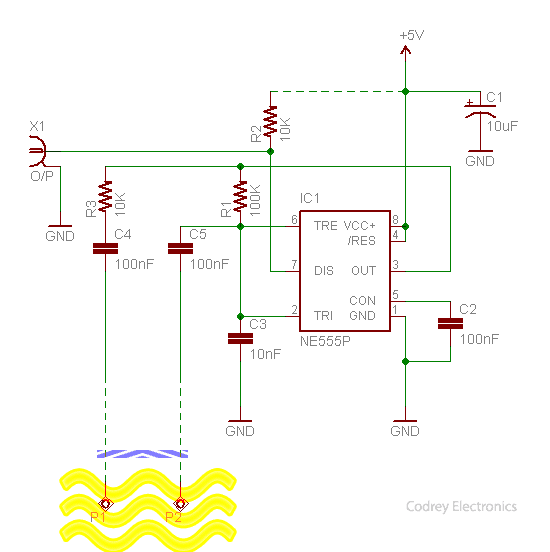 At this time, the NE555P (IC1) not only provides enough AC excitation but also a ‘tricky’ galvanic isolation. Note that IC1 works in its direct feedback mode, with a square wave on its totem pole output (Pin 3) charges or discharges the 10nF capacitor (C3). If the electrodes (P1-P2) are in dry state, the 100K resistor (R1) limits the minimum oscillator frequency in Hz range. But when the electrodes are short circuited, the 10K resistor (R3) in series with the two 100nF capacitors (C4+C5) and the electrodes set the upper frequency in kHz range.

In my case, the quick breadboard setup isn’t prepared with 1% resistors (and stable capacitors) so the results aren’t exactly as on paper, but has an approximative ‘open-probe’ frequency of  530Hz, and a ‘short-probe’ frequency of 4.5kHz. Notably, it’s roughly in 1.5kHz – 2.5kHz range with a moderate moisture level across the sensor probes/electrodes spaced a few millimeters apart.

Now you can go through a couple of cursory oscillograms recorded while I was testing the output signal of my breadboarded circuit powered by a regulated 5VDC power supply. As you might noticed, the output frequency is delivered from the open-collector “discharge” terminal (Pin 7) of the 555 IC. The 10K pull-up resistor (R2) is included deliberately to output a ‘cool’ square wave that can be extended further to a microcontroller-based readout circuit, a data logger device, or an irrigation controller. 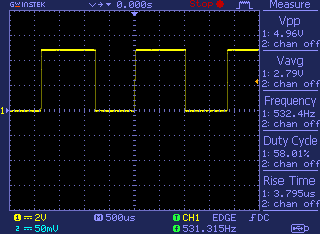 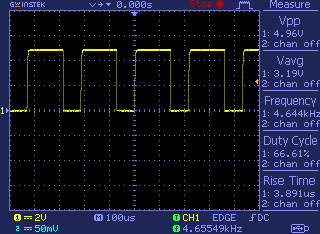 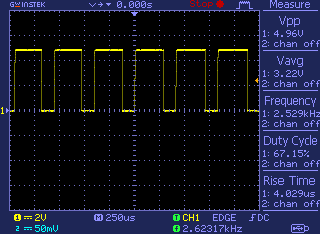 And, see a close-up of my quick breadboard setup. 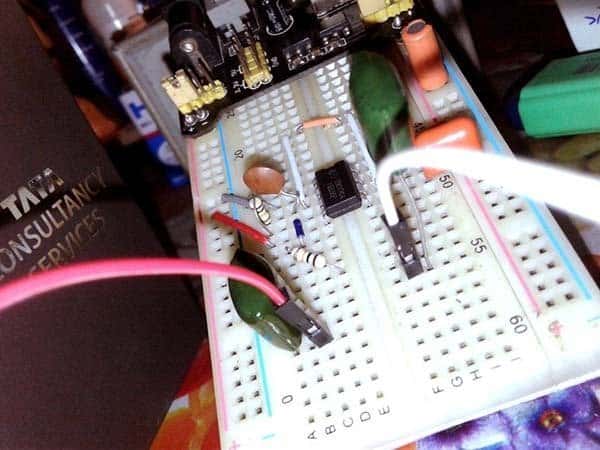 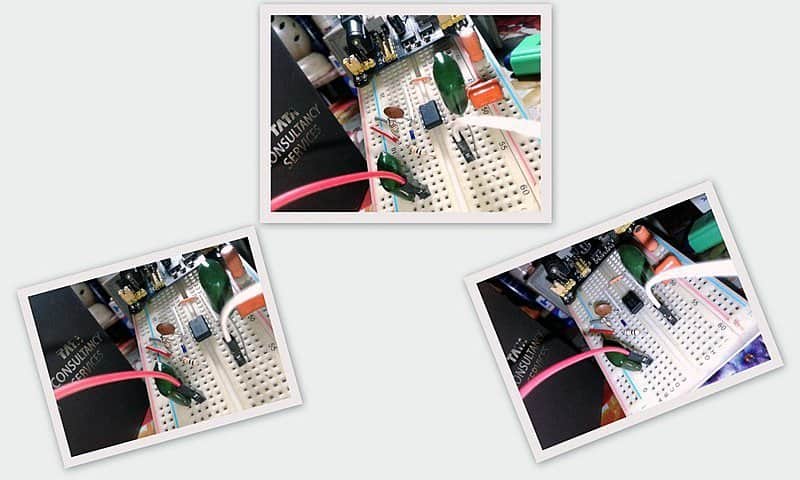 It’s time to do your homework (tweak it)

In order to build your own version of the electrical conductivity sensor, you might need to adapt the basic design as per your specific application. For example, you can set a different lower frequency by changing the value of RC timing components R1 and/or C3. Likewise, the upper frequency can be varied by changing the associated components R3,C4, and C5. 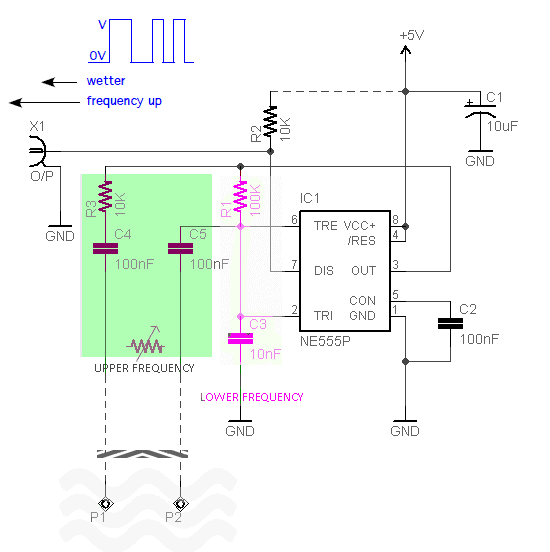 Keep it in mind that the presented circuit is merely a basic one i.e. it’s only a ‘single-node’ electrical conductivity sensor probe circuit, certainly not a full-fledged electrical conductivity meter, precision water/soil moisture level sensor, or a ‘fit and forget’ irrigation controller. If you plays along with the exact basic circuit diagram (Fig 3), you’ll eventually get one EC sensor having similar (or near-similar) specifications:

The open-collector/pulled-up output can be measured using a ‘count’ or ‘period’ function on a data logger. Alternatively, the raw frequency readings can be interpreted by a microcontroller to establish thresholds for irrigation or other actions. I’m pretty sure an Arduino (or the like) will work well for the rest of the ‘dreamed up’ electronics, but not going to cover that idea in this post. You can see more on that concept in a later post, and it’s going to be a good one for sure!

A few ideas for adaptation 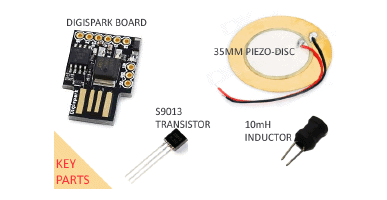 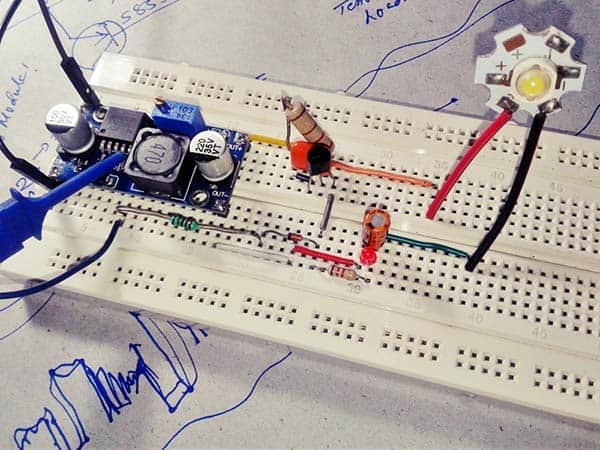