Assume that you’re in the middle of a microcontroller-based project with a big array of sensors and transducers ready and waiting to get their I/O allocation by the microcontroller, and sadly you found yourself there’s not enough fill for the can. In similar situations you can try an external analog/digital multiplexer/demultiplexer chip with your microcontroller as it can help you expand the I/O pins when you’re running out of pins!

A multiplexer (mux), in principle, merely acts as a single-pole multi-through rotary switch that allows you to control the flow of one pin to many others usually in either direction. For this primer, I’m just going to utilize the quite popular 16-channel analog multiplexer/ demultiplexer HP4067 (CD74HC4067). Nowadays you can buy cheap Chinese modules/ breakout boards based on HP4067, and it’s extremely easy to connect with your microcontroller. The module actually works as a 16 to 1 switch. The digital switch inputs (S0-S3) can be used in a binary style (0-15) to determine what channel (Co-C15) the “SIG” is connected to. Also, there’s an enable (EN) input to enable/disable the channels i.e. pulling it up to VCC will disable all channels, and pulling it down to GND will enable all channels. Much easier, right? 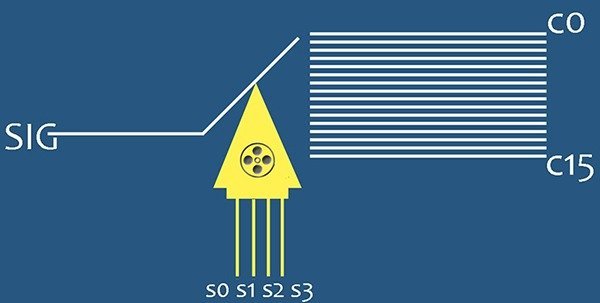 To recap, the “SIG” pin connects to any of the 16 available channels. When you write a binary code to the switch pins (S0 – S3) the corresponding channel (C0 – C15)  is selected. For example, by writing 1001 to S3 S2 S1 S0, the C9 channel gets connected to the “SIG” pin. At first, it may seem complex, but not. Below is a quick reference table for those who doesn’t feel binary comfortable.

The HP4067 module seems like a funny thing, that’s usual but never underestimate the power of the multiplexer chip resting at its core. It’s in fact a pretty smart digitally-controllable SP16T bidirectional switch. From what you’ve read, I understand that you have no problems playing your HP4067 module with Arduino. There could be a lot of things that you can do with, however, this time I’m giving only a few ‘starter’ hints.

For the quick run experiment, apart from the HP4067 module, you’ll need an Arduino Uno and 16 LEDs (or an LED bargraph display like the one used by me). The following code just lights up the LEDs, one after the other, with a small delay. Just to make it less cluttered, I used only 6 LEDs (out of 10) in the bargraph display with single 1K2 current limiter resistor (see the quick test video).

Note that here the “SIG” pin (D6) of the Arduino is configured as a simple output pin. Anyway, you can proceed with a PWM signal by configuring the “SIG” pin as an analog output pin and then calling the write method and providing as arguments the channel number and value (0-255) for the duty cycle of the PWM signal. The “MUX74HC4067” Arduino library will help you to grab more and more practicable ideas, so make yourself clear and then go to https://github.com/pAIgn10/MUX74HC4067.

Table given below depicts the recommended hardware interconnection:

You should add one LED per multiplexer output i.e. wire the anode of first LED to C0 and the sixth LED to C5. Then route cathode of each LED to GND through a 1K resistor (total six resistors). Again note that the given code is prepared for fewer LEDs, so if you want to use more LEDs, change the code as necessitated. 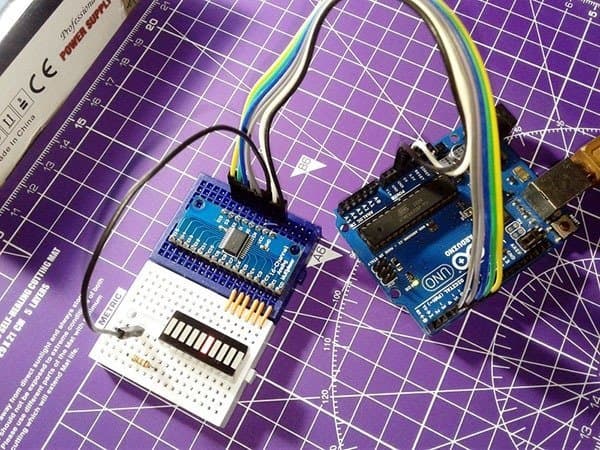 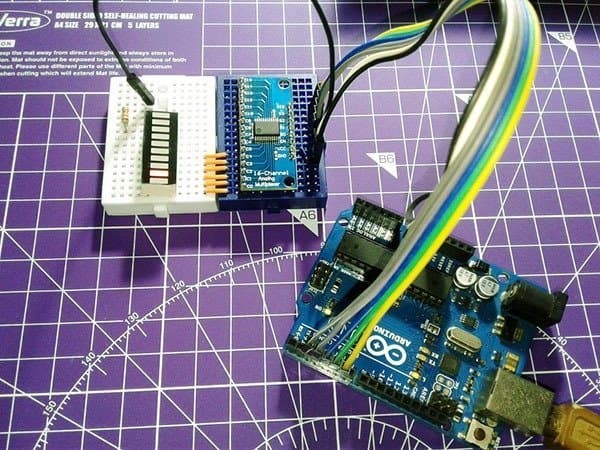 Quick test with a DIP Switch

If you don’t have an Arduino board handy, you can still use a standard 4-position DIP switch to manually select/control all switch inputs (S0-S3) of the 4067 multiplexer module. Here’s one basic idea of an active high DIP Switch configuration i.e. if a switch is closed/on, the signal will be connected to power (state = H), and if a switch is open/off, the signal will be connected to ground (state = L) through the resistor. 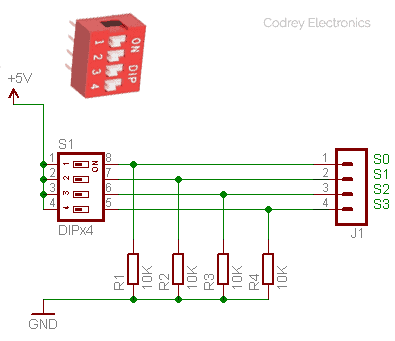 That’s all folks. I hope you enjoy this little primer, and if you have any comments or suggestions you can use the comments box below. Happy Multiplexing! 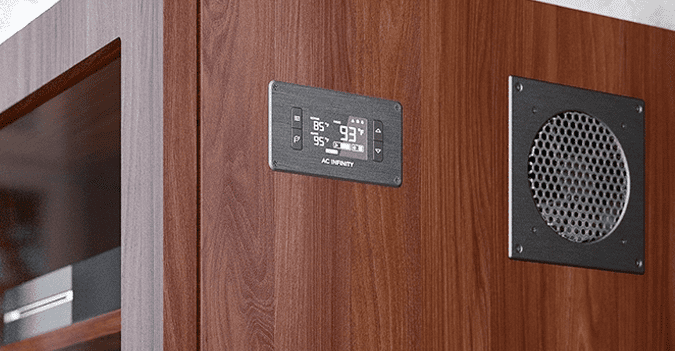