Resistor color code indicates that a series of colored bands are painted on the resistor and most of the manufacturers identify their resistance value by means of a color code. There are various values of resistors available from some ohms to millions of ohms. It is not possible to have each and every value of resistor like 1Ω, 2Ω, 3Ω, and so they are in tens or hundreds or thousands. To overcome this, resistor color coding is introduced.

On every pinned (through hole) resistor, there are colored bands which denote the value of resistance in the resistor. Almost all resistors (pinned) with a power rating of up to 1 watt are marked with color bands. The coding of color is defined in the international standard 1EC60062. And also, the entire body of the resistor is colored; there are one or more colors on the ends of the resistors (called as tip colors) and lastly, there is a spot of paint on the body. 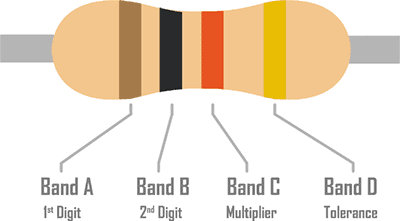 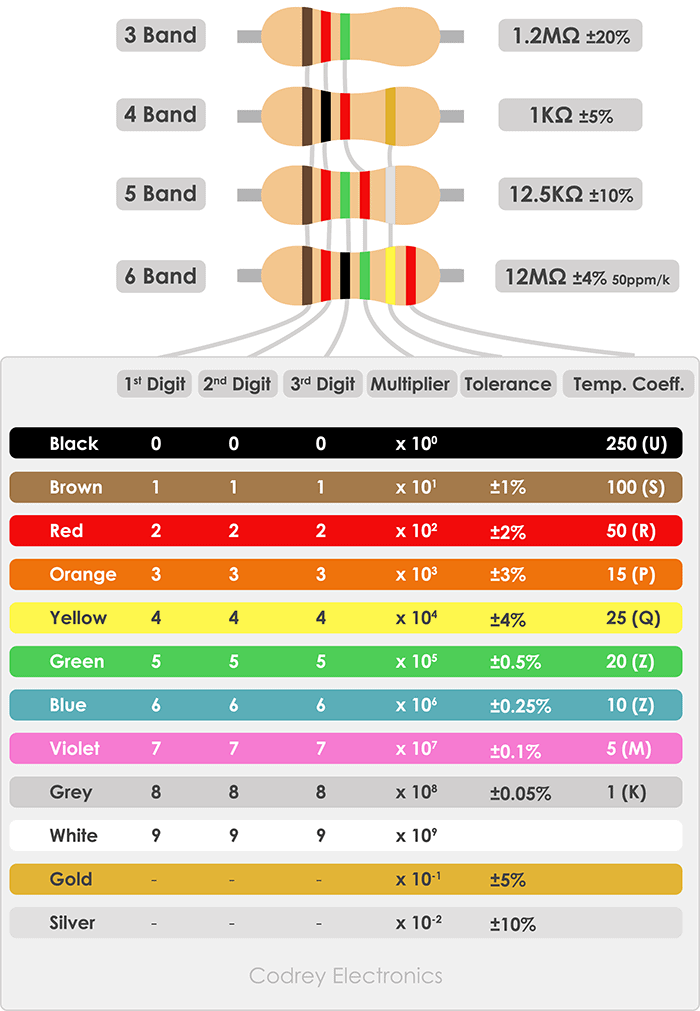 Before reading the resistor color codes, we need to first figure out from which band to start with. The tolerance band is situated with some gap from the other 2-3 bands so we get the idea from where to start with. Also, it is advisable to read the datasheet of the manufacturer to get the better idea of how to calculate resistance value from their color code.

Note: If no tolerance band is given, then the tolerance should be taken as ±20%.

The first two color bands in a resistor denote resistance value (represented in ohms).  To determine the standard resistance values, power ratings, the temperature coefficient of resistance and tolerance the resistors are grouped as 3 bands, 4 bands, 5 bands and 6 bands.

For example, a resistor with 3 bands in the above figure has Orange, Red, and Black colors. The resistance of this 3 band resistor is calculated as:

So, the three band resistor value is 32 multiplied with one which is equal to 32Ω ±20%.

The four band resistor indicates the first digit for the 1st band, second digit for the 2nd band, third digit for 3rd band (multiplier or power of 10) and the fourth digit for 4th band represent tolerance of ±5%, ±10%, and ±20%.

To calculate the resistance of four band resistor, the below color code chart is considered. The resistance value is calculated as:

These are the special type of resistors with five bands. Other than, one or two coloured bands five band resistor has extra third digit value. This band is present in high precision resistors.

To find the resistance of a five band resistor, here is the calculation.

Here is the temperature coefficient calculation of 6 band resistor for 2.3 MΩ resistor at 40°C.

How to read  Resistor Color Code?

The first two bands of resistor show the resistance value of the resistor. And the third band is a multiplier. If the colored bands on the resistor are green, blue and red. Then value of resistor is 56 × 100 = 5600Ω i.e. 5.6kΩ.

As I said, some resistors have the fourth band on them. The fourth band shows the tolerance and mostly seen in high precision resistors. If the colored bands are green, blue, red and brown, then the value of the resistor would be 56 × 100 = 5600Ω 1% i.e. 5.6kΩ ±1%.

Resistors with high precision also have an extra band for the third digit of their value. So if there are 5 bands on resistance and colored bands are brown, black, black and red then the value will be 100 ×100 = 10000Ω = 10kΩ of resistance in the resistor and the fifth band is tolerance. The tolerance band has increased space between 3 or 4 bands. Now if the last band has a brown color, then tolerance would be 1% and the resistor value will be 10kΩ ±1%.

Thus in this way, we can figure out the value of resistors from their color code. However, by measuring using a multimeter or ammeter, we can get the exact measurement of resistance in the resistor. This method is widely used in assembling industries where workers use their skills to identify the value of the resistor by color coding.