How is the Resistance Measured?

We can connect voltmeter and ammeter in a circuit to determine low resistance and high resistance in a circuit. They are a bridge method and fall of potential.

The bridge connection method uses a Galvanometer and a simple resistor with high precision. Some of the bridge type resistance measurements are Wheatstone bridge, AC impedance, and Kelvin double bridge.

The fall of potential method uses voltmeter and ammeter for resistance measurement. The voltmeter calculates the voltage and ammeter measures the current. From the ohms law, we can evaluate the resistance.

How to measure Low Resistance (<1Ω)

To understand how to make a low resistance measurement less than 1Ω, three methods are used. They are potentiometer, voltmeter-ammeter, and kelvin bridge.

The voltmeter – Ammeter method measures the low resistance with an accuracy of ±1%. To achieve one percent tolerance, it uses four terminals for measurement. Two of them are current terminals (C1, C2), and the remaining two are potential terminals (V1, V2).

The Kelvin bridge (Thomson Bridge) measurement has the benefit of canceling the extra resistances from the test leads and contacts. The below figure shows the kelvin double bridge circuit.

The bridge uses double ratio arms to nullify the resistance. ‘R‘ is the unknown resistance and ‘S‘ is the standard resistances of low value. ‘C‘ is a heavy copper connection. The branches a, b, a1, and b1 are high resistances values when compared with ‘R‘ and ‘S‘.

The kelvin double bridge equation is given by the formula

For correct measurement, the ratio of ‘R‘, ‘S‘, and a, b must be equal. Now, the circuit is in balance condition. This will deflect the current in Galvanometer ‘G‘. This bridge measures the resistances in the range from 0.1 ohms to 1 ohm.

The voltmeter equals the sum of the current across ammeter and voltage across resistance ‘R‘. To measure resistance output (Rm), the value of resistance ‘R‘ must be greater than the resistance of ammeter (Ra). Hence this method is suitable for measuring medium resistances.

The true value of measured resistance is Rm = R+Ra. To get exact resistance, the ammeter resistance must be zero. This is true in the ideal case.

The error at full scale for the ammeter voltmeter method is about 0 to 1%. Hence the Wheatstone bridge is preferable.

The Wheatstone bridge is an old method and is no longer in practice. But it tells the concept of a balanced bridge to measure unknown resistance. The bridge has diamond shape grouping which consists of four resistances A, B, R, and S. The resistance B and S are fixed resistances.

The voltage is applied to the input terminals ‘a‘ and ‘s‘ and the galvanometer (also known as a null detector) is connected to the output terminals ‘p‘ and ‘d‘. To measure the resistance ‘R‘ using Wheatstone bridge vary the standard resistance ‘A‘ until the current in the galvanometer reads zero current reading. This proves that the bridge is present in a balanced condition.

Here are steps on how does ohmmeter work to measure the resistance of a resistor or some component.

Note: Always check for the resistances connected in parallel. The multimeter computes the resistance between the different paths in a circuit.

The multimeter measures the total resistance in a circuit through all possible paths. It’s always better to remove the component to measure the resistance. Otherwise, the multimeter will show wrong resistance reading.

The resistance measurement by using the loss of charge method uses an unknown resistance (R) in parallel with the voltmeter and a capacitor (C). When applying the DC voltage, the current flows through the circuit and the capacitor charges until the battery voltage. After that, it discharges through the resistance ‘R’.

The equation for voltage across the capacitor is  v = V.e(-t/CR)

The use of megger is to measure high insulation resistance in a circuit. The below figure shows the circuit of megger.  It uses a hand-driven generator which produces a voltage of 500V, 1000 and 2500V.

The generator incorporates an automatic clutch that uses the centrifugal principle to operate the instrument. The generator supplies a constant voltage to measure the low insulation resistance. 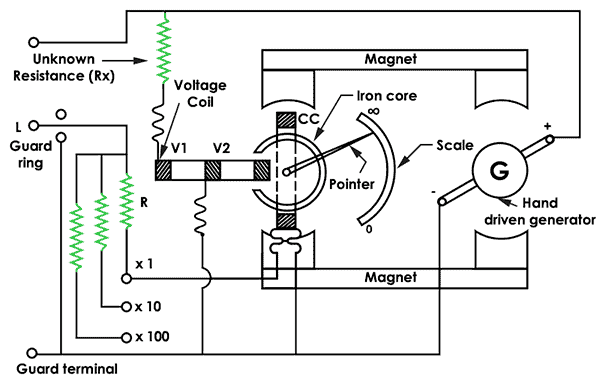 The megaohm bridge measures high resistance from 0.1 megaohms to 1 megaohm. The guard terminal is connected to the galvanometer (G). The multiplier switch is used to select the range of resistances to be measured. 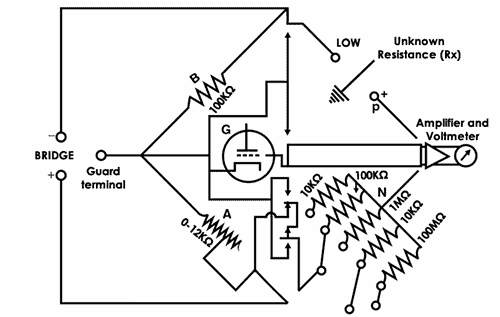 A fixed resistance of 100 KΩ and connecting a guard terminal to a guard circuit removes the leakage resistance.

Tip: Power off the circuit and measure the resistance.

Nowadays, there are multiple methods for resistance measurement. Among them, LCR meter and digital low resistance ohmmeters supersede with the Wheatstone bridge, Kelvin double bridge, and other methods. Hence it is necessary to select a proper instrument for testing the resistance. 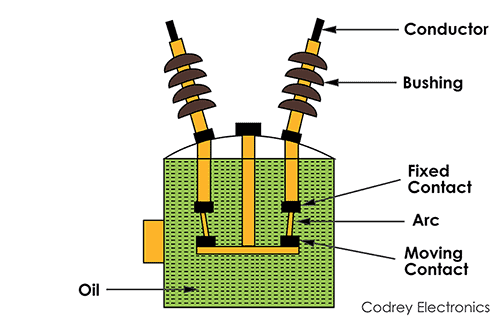 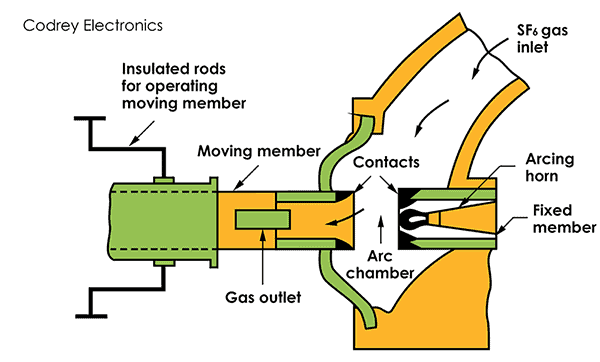 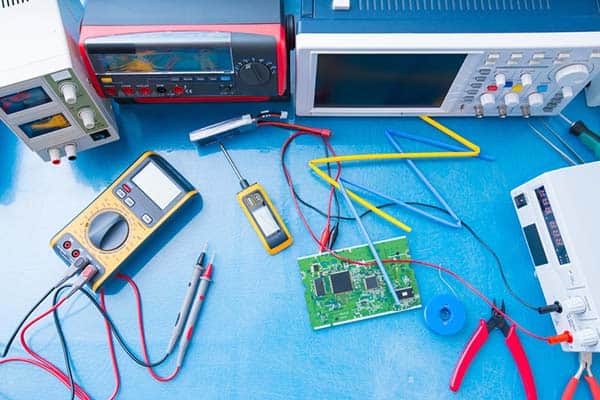