Many types of fuses are there that interrupt an over-current and breaks the circuit by melting the fuse element. They are mainly divided into two types, AC fuse, and DC fuse. Furthermore, fuses are classified into different types depending on voltage and construction. They are: 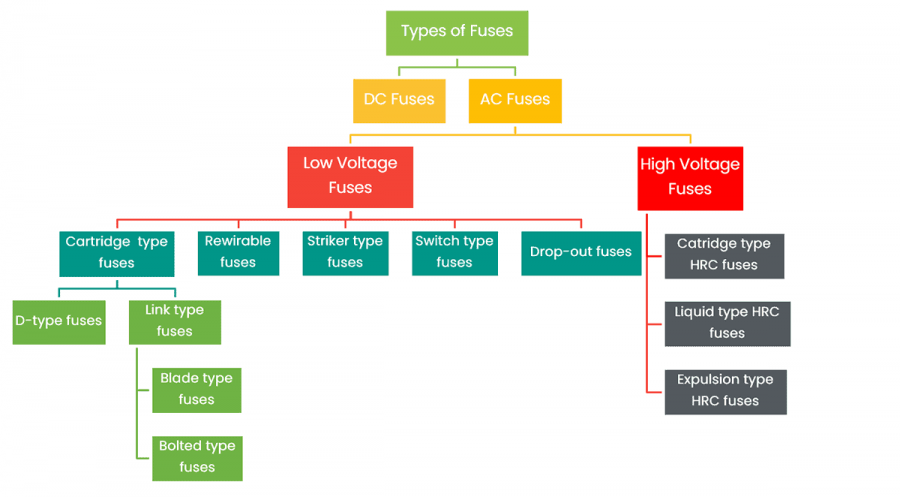 DC fuses produce an arc that are difficult to stop than AC arcs because there are no zero current flows in the circuit. For reducing the DC fuse arcing the electrodes are placed at more distance due to which the size of the fuse increases as compared to AC fuse.

In AC circuits, the arc extinguishes easily when compared to DC circuits. Because the frequency of the AC fuses changes its amplitude from 0º to 60º in every one second. AC fuse is further divided into two categories. They are low voltage fuses and high voltage fuses.

Cartridge fuse consists of the heat-resisting ceramic body enclosed by a metal cap at both ends. The filling material such as chalk, plaster of Paris, quartz or marble dust surrounds the body space which acts as an arc quenching and cooling medium. Often, they are widely used in industries, agricultural areas and residential purposes such as fuse panels, air conditioning, pumps, and home appliances

These types of fuses are classified into D-type and Link-type fuses.

Link-type cartridge fuses are also known as High Rupturing Capacity fuses (HRC). HRC fuse has a high breaking capacity. It has two metal ends on both sides. The Filling of the fuse with powdered pure quartz acts as an arc extinguishing agent. The fuse element uses silver or copper for its construction.

The fuse element carries the short circuit current for a long period of time. During this time, an uncertain fault will melt and open the circuit. The chemical reaction between a silver vapor and the filling powder forms a high resistance which helps in quenching the arc.

The breaking capacity of the fuse is increased by using two or more silver wire in parallel. This type of fuse is very reliable and divided into two types: Blade type fuses and Bolt down type fuses.

The Blade fuse are also known as spade or plug-in fuse. Automotive OEMs use this fuse for vehicle circuit protection and withstand high temperatures. Whereas, Bolt down fuse are special-purpose ones suitable for diesel vehicles and not appropriate for automotive trucks.

Re-wirable fuse is also known as a kit-kat fuse. It is a simple and cheapest form of a fuse. This fuse is suitable for domestic wiring for e.g in houses. Moreover, when the fuse blows out, it is easy to replace and reuse.

It consists of a fuse base and a fuse carrier.  The construction of fuse element in the fuse carrier uses tinned copper, lead or aluminium and porcelain for the base.

The base has two terminals for incoming and outgoing supply. When a fault occurs, the fuse element blows out and interrupt the circuit. The blown-out fuse can be replaced by a new one.  The main advantage of this type of fuse is, it is rewireable but the disadvantage is less reliable.

This type of fuse has a mechanical indicator or striker pin that protrudes through the fuse cap upon operation of the fuse. This provides visual identification of a blown fuse and acts as a trigger for external devices. It can be used for short circuit protection of medium voltage motors.

Drop out fuse is an expulsion type fuse to protect the transformers. When the fuse element melts, it falls due to gravity, hence providing additional isolation.

Switch fuse is used for low and medium voltages circuit. They can safely break depending upon rating currents of the order of 3 times the load current.

This cartridge fuse is similar to low voltage HRC fuse with some extra features. The fuse wounds in the shape of a helix or use two fuse elements in parallel to prevent the corona effect at the higher voltages.

One of the fuse element has low resistance and the other has high resistance. Therefore, a low resistance wire carries the normal current which blows out and reduces the short circuit current during a fault condition.

HV HRC fuses are available with a rating of 33kV with a rupturing capacity of 8700A.

A liquid fuse (for high currents) consists of a glass tube filled with carbon tetrachloride and sealed with brass caps at both ends.  The fuse wire covers sealing at one end and fixing by strong phosphor bronze spiral spring at another end of the glass tube. The liquid acts as an arc extinguishing medium.

The fuse blows out when the current exceeds the maximum limit. Liquid type HRC fuse protects transformer and circuit breakers. They withstand current upto 100A on systems up to 132kV.

This type of fuse is an escapable fuse in which the expulsion effect of the gases produced by internal arcing results in current interruption. The fuse link chamber contains boric acid. Therefore, an internal arcing helps in the protection of feeders and transformers.

There are different types of fuses in the market and each fuse has its advantage and use. They are self-acting brake appliances for the protection of loads. Moreover, they are present in cable wires and motors for protecting short circuits. 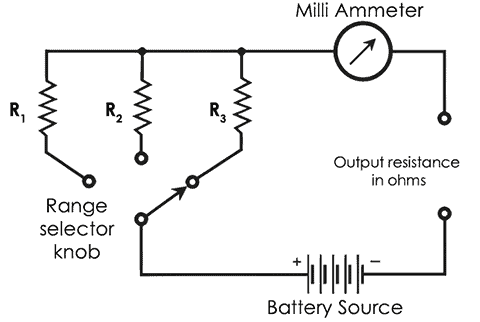 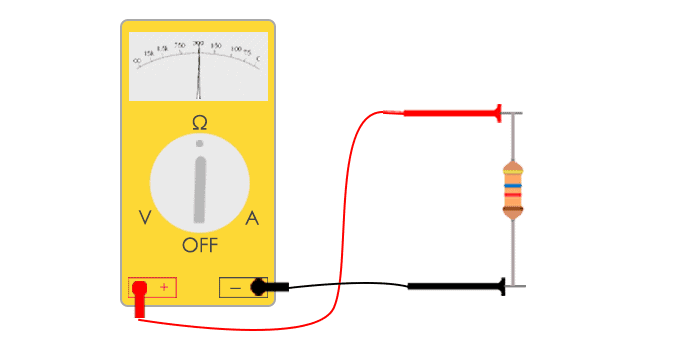