In the previous tutorial, we had discussed the applications of current, voltage, and importance of Coulomb’s law in electricity. But, without ohms law the operation of an electric circuit becomes incomplete.

To fulfill this, Ohms Law is also involved. A German physicist Georg Simon Ohm discovered the ohms law and found the relationship between current, voltage and resistance.

In this tutorial, you will know how to apply ohms law to different applications of electrical and electronics engineering.

Electron current is the number of electrons moving per second. However, for practical applications, we need less amount of electron charge. To simplify, two measuring units known as Ampere and Coulomb have been used.

The coulomb indicated by ‘Q’ expresses an adequate amount of electric charge.

The Ampere represented by ‘A’ is the strength of unit current or the number of electrons traveling per second, in this case, one coulomb per second.

An Ampere is too large for some of the applications. So, it is again divided into subparts known as milli-ampere (mA), and the micro-ampere (µA).

Now let us discuss resistance. Since the composition of various materials is different, some materials offer high opposition to the flow of electrons than other metals. This electrical phenomenon is known as resistance.

Now, if we apply driving force or Electromagnetic force (E.M.F) across a conductor, a great number of electrons will flow rapidly. This proves that resistance of the conductor is low.

On the other hand, applying same E.M.F to an insulator will produce fewer electrons. Hence, the resistance of an insulator is high.

The resistance is expressed in Ohms and denoted by the Greek capital letter ‘Ω’. The unit of E.M.F is the Volt. One Volt is the driving force necessary force required to produce a current strength of 1A in a circuit having a resistance of 1 Ω.

Ohm’s law relates the electrical quantities such as current, voltage, power and resistance. To know the practical use of the ohms law here is an example.

Connect a wire of certain resistance, in series with 1.5V battery source and assume that ammeter indicates a current of 0.2A. Now, if we increase the voltage to 3V, the current meter will show more current reading, say, 0.4A.

A similar thing happens if we change the length of the conductor wire, keeping the applied voltage as constant.

If we change the length of wire to shorter or longer, it has some effect due to the resistance of the wire.

For example, by applying constant E.M.F of 1.5V and the length of wire is 2m, the current drawn is 0.3A.

Now, if we change the length of the wire to 1m, the current will be lesser 0.1 (but not 0.3) because of less distance to cover and less resistance to overcome.

When you take a metallic conductor and flow some current through it, the potential difference between the two ends of a conductor is constant. 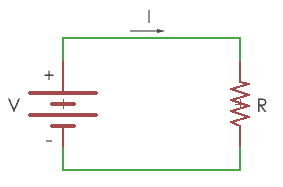 Ohms law states that “the current flowing through an electrical circuit will change when a voltage is applied, but the resistance is inversely proportional to the resistance of the conductor material”.

The formula of ohms law is represented by the equation

‘V’ is the potential drop(voltage) across the resistor.

‘I’ is the current flowing in the circuit through the resistor

‘R’ is the resistance value of resistor represented in ohms.

The above equation, I=V/R depicts the following facts.

Now keep voltage in the circuit as a constant parameter, If you change the resistance, the current will also vary.

The relation between voltage and current is linear. i.e. with larger voltage, the current will be higher and lower current for smaller voltage.

The relationship between voltage, current, and resistance can be known by finding the third quantity from the known two values.

The two known values may be either voltage, current or resistance.

Ohm’s law can be represented in three forms. To understand simply, ohms law circle or ohms law Triangle is used in electrical circuits to find out the third quantity of the two other quantities.

The circle or triangle method is used for memorizing the ohms law.

Here I am using ohms law circle to find out voltage, current, and resistance. 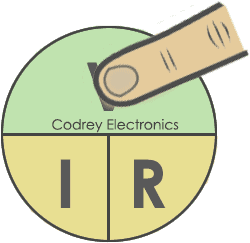 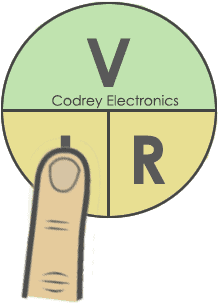 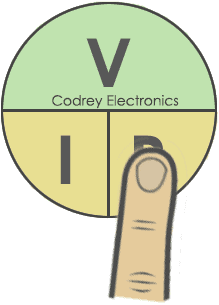 By combining voltage, current, and resistance we can get a common relationship to draw the ohms law graph. 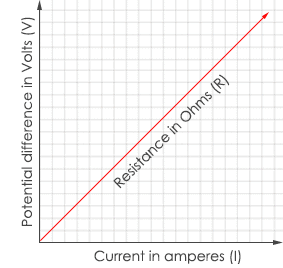 From the graph, if the current in an electrical circuit increases voltage increases linearly and vice versa.

To make the relation easier Ohms law Table is given for quick reference.

Now, let us know how to use ohms law formulas in a practical way.

1. Finding the current in a circuit 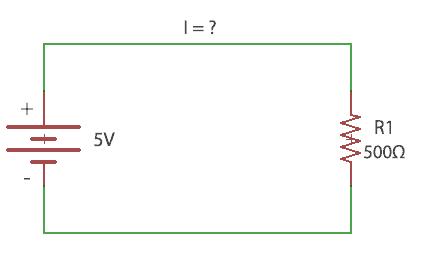 So, by applying 5V potential a current of 0.01A flows through the 500 ohms resistor.

2. Finding the voltage in a circuit 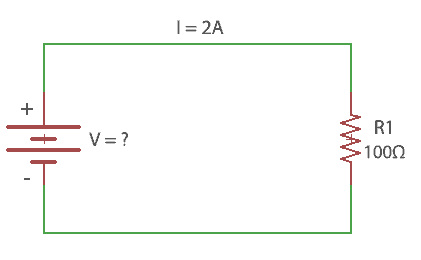 So, the battery voltage for the circuit is 200V.

3. Finding the resistance in a circuit 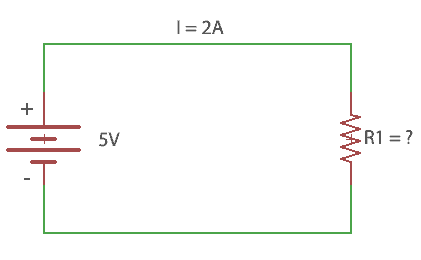 So, a resistance of 2.5 ohms has to be connected in series with the battery source.

Ohms law is useful in designing power supplies for the electronic circuits. Voltage dividers decide the regulated output for proper function of the circuit. This is achieved by choosing correct resistance using the ohms law. 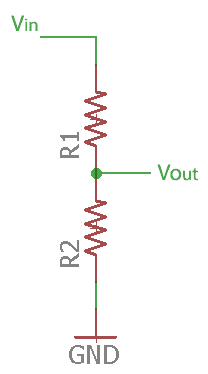 Some types of sensors gives current reading as output. For example, radar sensor gives a current output of 4-20mA. 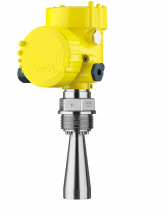 This current output should be converted to a voltage using resistance equation. The obtained analog voltage is then processed through ADC (Analog to digital converter).

Ohms law is extensively used in speed controlling applications. It is used in potentiometer also known as “POT”. The knob resistance is varied slowly, which increases the voltage and rotates the motor or fan.

It is also used in the reduction of complex electrical circuits using Kirchhoff’s Voltage Law and Kirchhoff’s Current law equation. A series and parallel circuits can be realised simply using ohms law.

It is important in real life to find out the current and voltages for any application. A small deviation in the output load may burn or damage the circuit. To avoid this, it is required to apply the principles of ohms law and build a valid electronic system.