Current is the measure of the rate of flow of electric charges across the conductor. It is measured in the unit of Ampere. This current measurement in a circuit is mostly done by Ammeter.

The capital A represents the ammeter in the circuit.

How to use an Ammeter

Before we start measuring current, we will first set the ammeter range. Keeping the range to highest will prevent the ammeter to blow up its internal fuse. Then set the current type i.e. DC or AC. 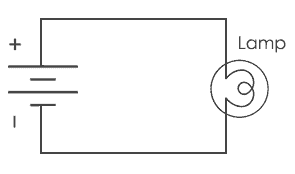 You can now observe readings in ammeter and that is the amount of current flowing in your circuit.

Now once you have noted readings from ammeter disconnect the ammeter and connect the wires as in simple circuit back.

To measure current, some precautions have to be taken. Do not connect your ammeter’s probes directly to the battery to check the current of that battery. This will create a short circuit in the ammeter and sometimes this activity can blow your ammeter’s internal fuse. So please do not perform this activity. 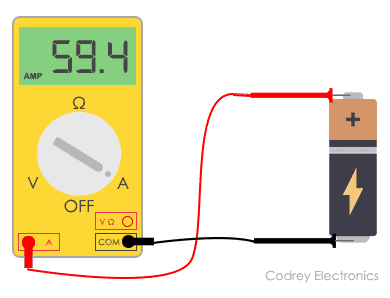 If you want to check the current of the battery. Add a resistance across the battery and connect an ammeter in series. The readings will be correct and accurate, no need to worry. 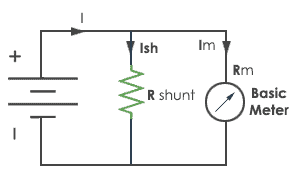 Other Methods to measure Current

The advantage of this magnetic method is that this method is capable of measuring large currents.

These are two methods widely used other than measuring with an ammeter.

So, this is how you should use ammeter with all the precautions and measures. Ammeter has made calculations of current in electrical devices very easy and now with ammeter we can measure small currents in mA (milliampere) to large currents in kA (kiloampere).